A Christmas Gift from Jaded Babies - Our first single!

Well it's been a heck of a year. This is the longest Bryan has gone without being on stage in thirty years and it hurts! Being locked in their cribs has been tough on the Jaded Babies you know and love, but they've been spending their time working on recording and are proud to present their debut single "Monkeys!" Where the heck did we get a horn section? Wouldn't you like to know. Eight more songs are in the hopper so look for more releases as we move through 2021. But for now please enjoy our first single!!

If Blink-182, Porcupine Tree and Monty Python had kids, the result would be Jaded Babies! In addition to our blend of progressive rock, punk and humor, each Jaded Babies show has a theme. And on Saturday night, January 25, find out whether we have reverence for Chinese New Year, or just happen to have a show that night. Energetic and complex songs about owls, poop, and China abound at 9 PM at LP n Harmony, 683 Grand Street in Brooklyn. There’s no cover charge, and we promise good music, laughs, and as always, free candy. And if that’s not enough, on this tremendous night, Jaded Babies will be performing selections from our forthcoming release, Einstein on the Toilet. 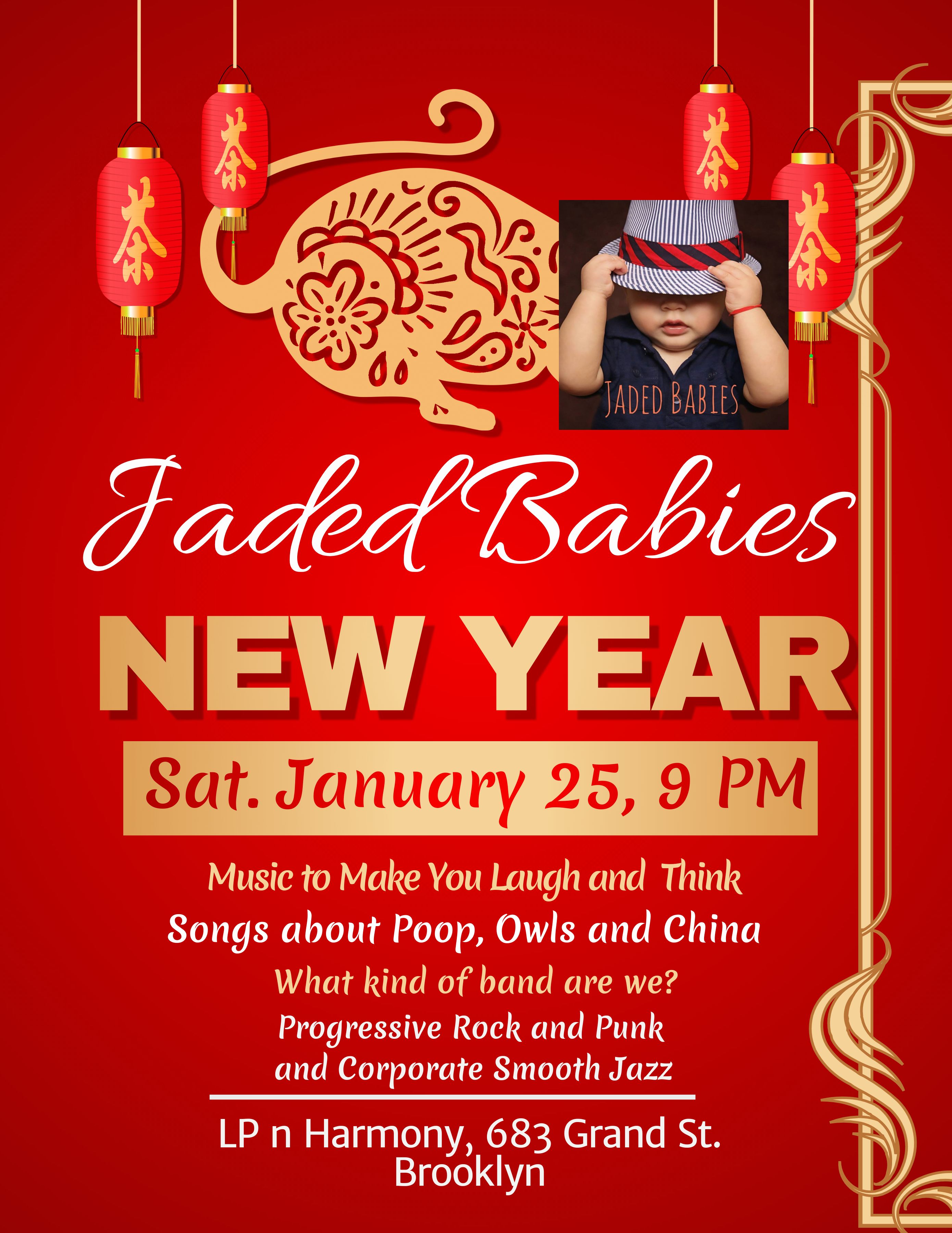 A Jaded November! - Two gigs and a studio session

At long last the fates have aligned, and Jaded Babies are going into the recording studio! We're looking at eight songs, and anyone who has seen us live over the past few months has heard all of them as we practice them all live to prepare for the recording. We're asking a lot of friends to record along with us, so the songs may come out in dribs and drabs rather than all at once, we'll see. But for now, get excited!

We also have two shows coming up in November! In Brooklyn on Friday, November 8 we'll be commemorating a special set of shows Bryan's band Progressive Dementia played a decade ago called Beefstock. More details here for the nostalgic or curious: BEEFSTOCK REVIEW. Yes believe it or not, an old band of Bryan's played "prog-rock parodies, alternately subtly satirical or completely over-the-top." Hard to imagine.

More details at the Shows tab above, can't wait to see you there!

Jaded Babies Go Back to School - In Brooklyn!

On October 5, learn what your teachers wouldn't tell you about what was in their diapers in our semi-loving tribute to going back to school!. We mix the energy of punk with the musical and songwriting chops of progressive rock and the staging and spirit of comedic theater. Come see a satirical Rush tribute, a swing tune about millenials, and a tearjerker about an owl all in one night. We’re fun, funny, AND can play our instruments. Featuring special guest vocalist Liz Tapia! Plus of course, free candy. 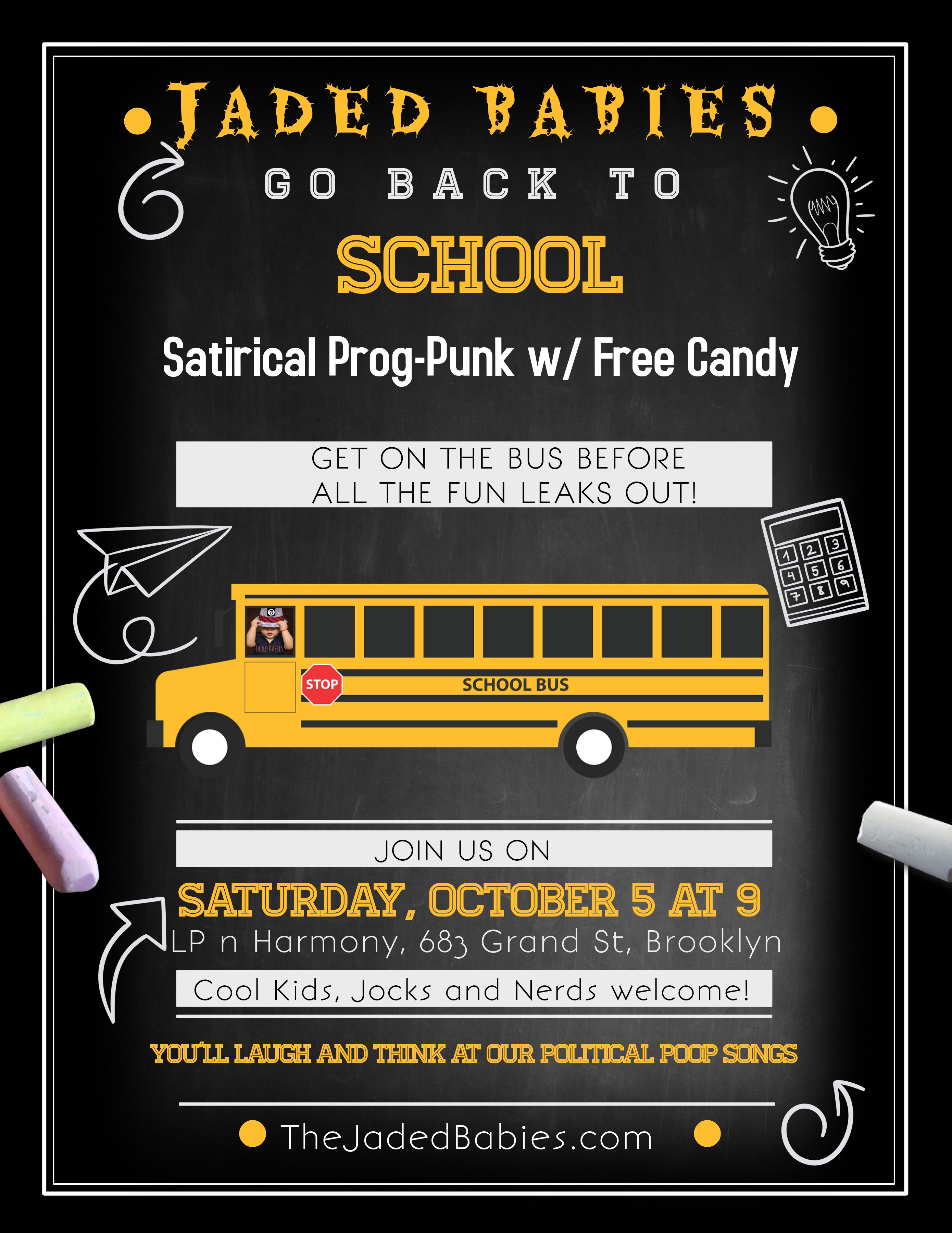 On the last day of Bryan’s 40’s, give yourself a gift and come see him sing about silly things with your favorite naughty prog punk jazz band! We will be playing everything from our upcoming EP, plus a few surprises. Come see a satirical Rush tribute, a song about pooping, a swing tune, and a tearjerker about an owl all in one night. We’re fun, funny, AND can play our instruments. Featuring special guest vocalist Liz Tapia from Dark Beauty!

The show is at The Bowery Electric, 327 Bowery in Manhattan, on Saturday, September 14 at 8:15. Come on, how often does this band get a decent slot on a Saturday night? Advance tickets are available at ticketfly.com. Can’t wait to see you there! 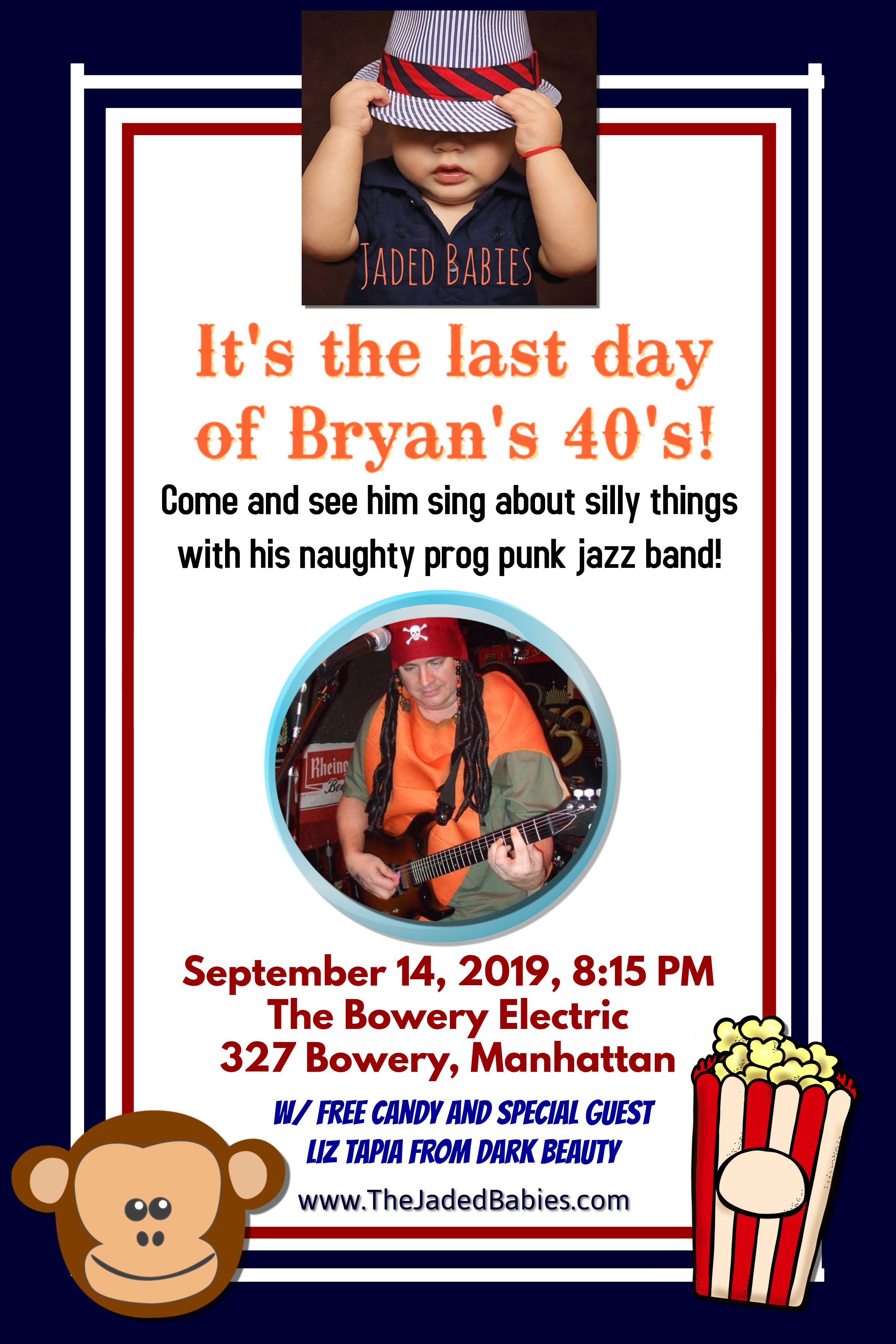 Yep, it's true. We're not so jaded that we don't want to let you take us home with you. So Jaded Babies are going into the studio! No spoilers yet, but it's looking like eight tracks, with a few songs from our predecessor bands (The Ass Orbiters and Progressive Dementia.) The main focus of the recording though will be the new songs we've written in the past two years since we got together. And we also plan to ask a lot of our friends and heroes to guest on the recording! Not sure who will actually say yes, but we're pretty persistent!

Keep an eye out for gig and studio announcements, we'll be focusing on the studio tracks for this fall's shows. See ya soon! 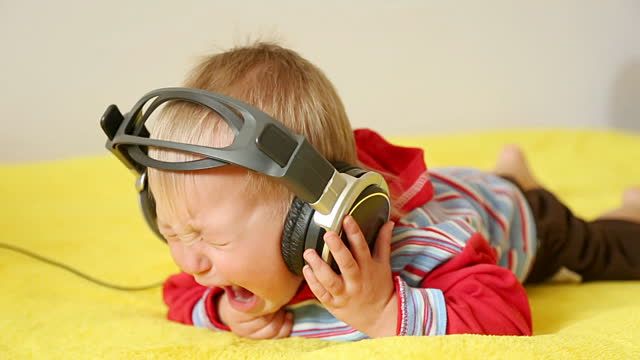 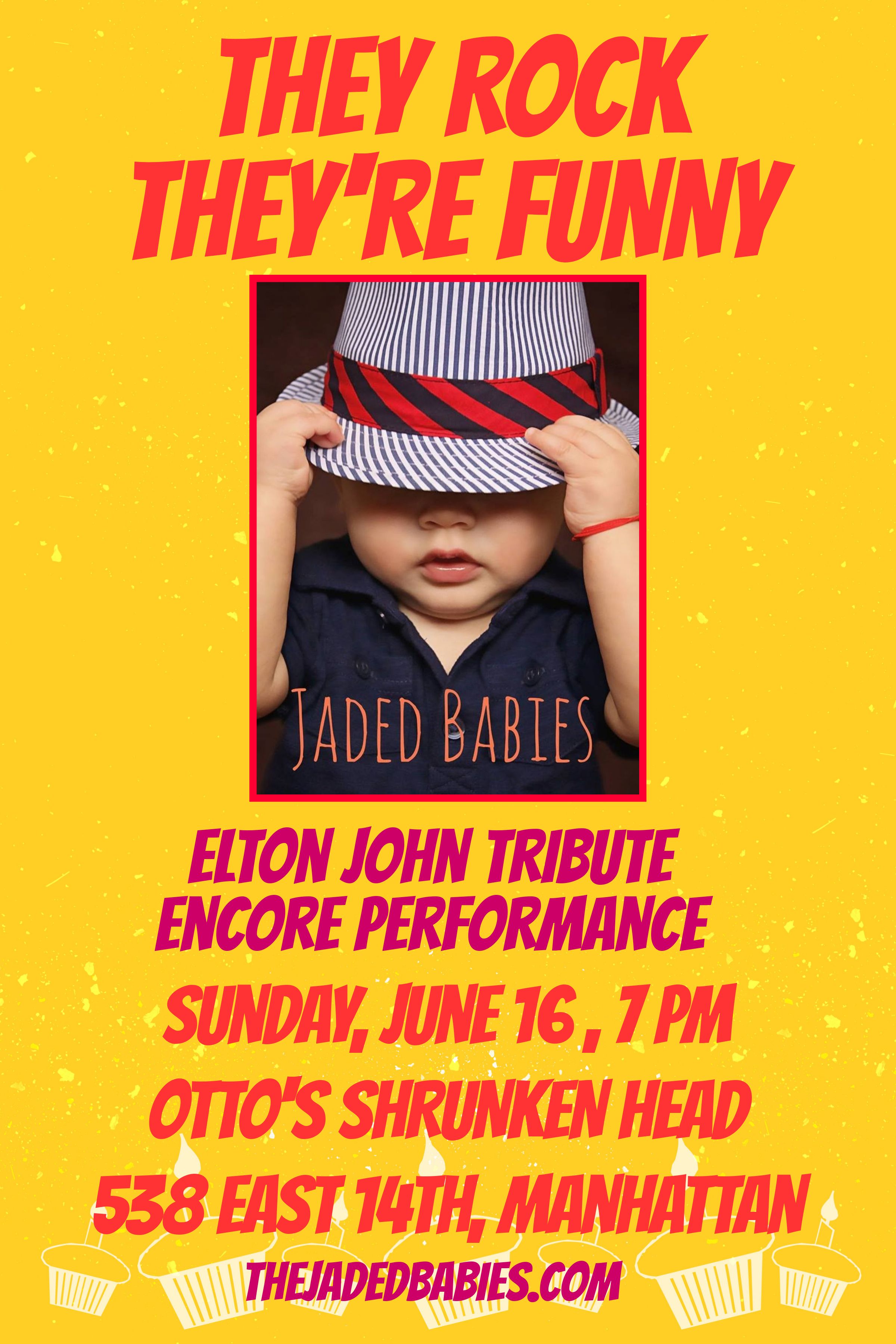 Yep, this is it, we've finally made the big time! This is gonna be quite a show, we're in between a band that performs original songs about Lithuanian food, and a band called Weird America. It's like they designed the night for us! Come on out to Connolly's in Times Square after work on Friday, May 31. We'll have some new music, and classic Jaded Babies tunes. 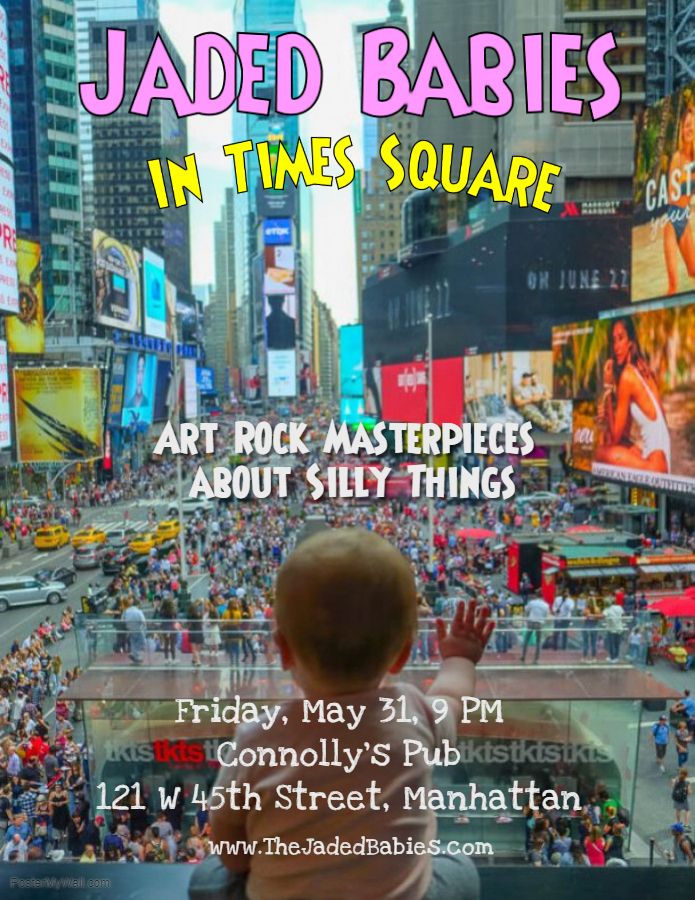 Have A Happy Easter with Jaded Babies

It's OK, we know. By Easter night you'll need a good stiff rum drink and some amusing satirical rock. Jaded Babies love Easter. It's a time of renewal, free candy, and art rock masterpieces about poop and annoying neighbors. We're the gloriously satirical rock antidote to your holiday malaise. Come on out to Otto's and have some rum and hear Jaded Babies classics and a medley of Easter rock songs. We're your new favorite band! 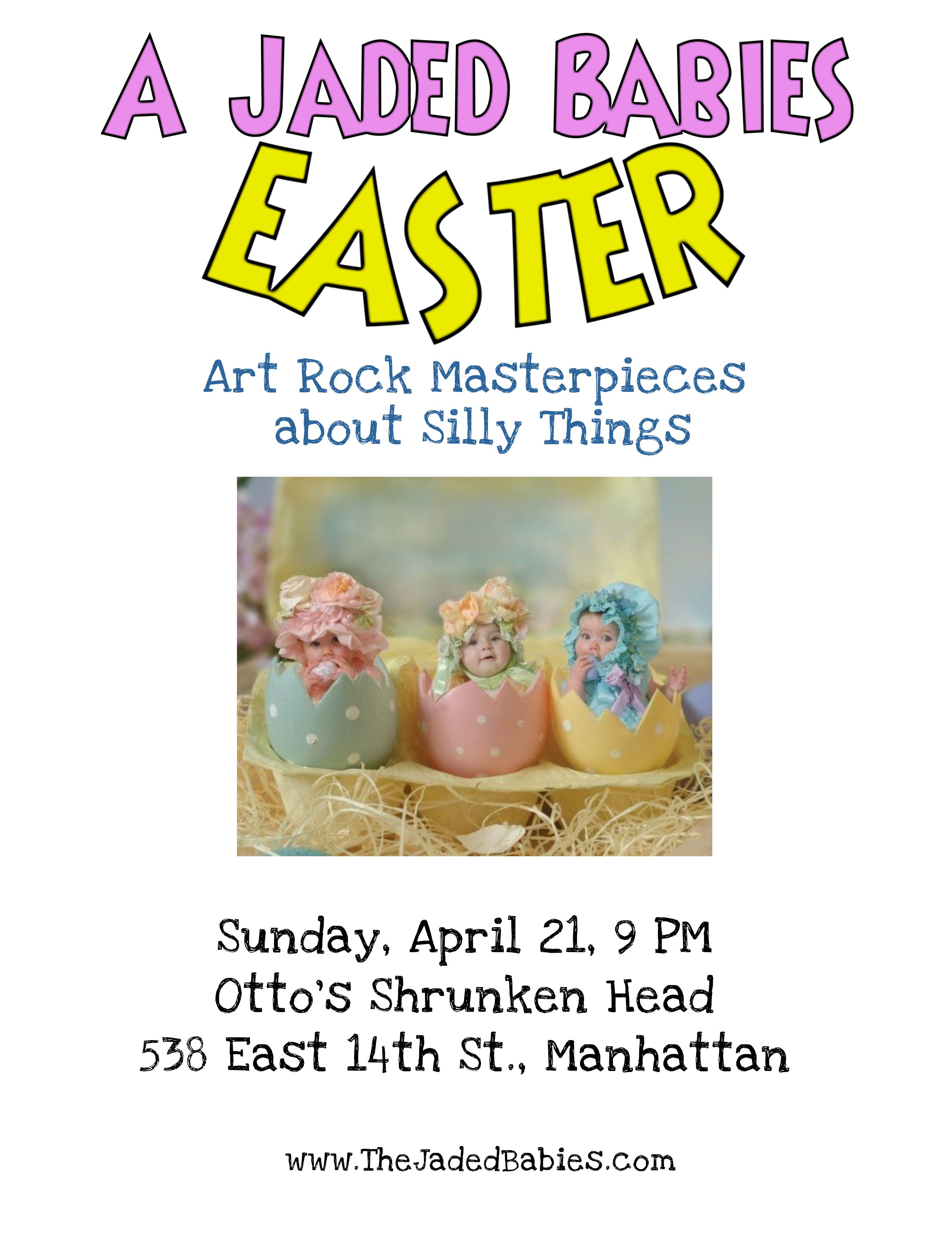 First show of 2019 announced. See you in Manhattan!

Everything is better in 2019, and that includes Jaded Babies. Sure we write great songs about silly things, and can actually play our instruments. The holidays are over, and we know you need to laugh. Come see our show, it's as fun as doing something truly naughty, only you'll smell better. 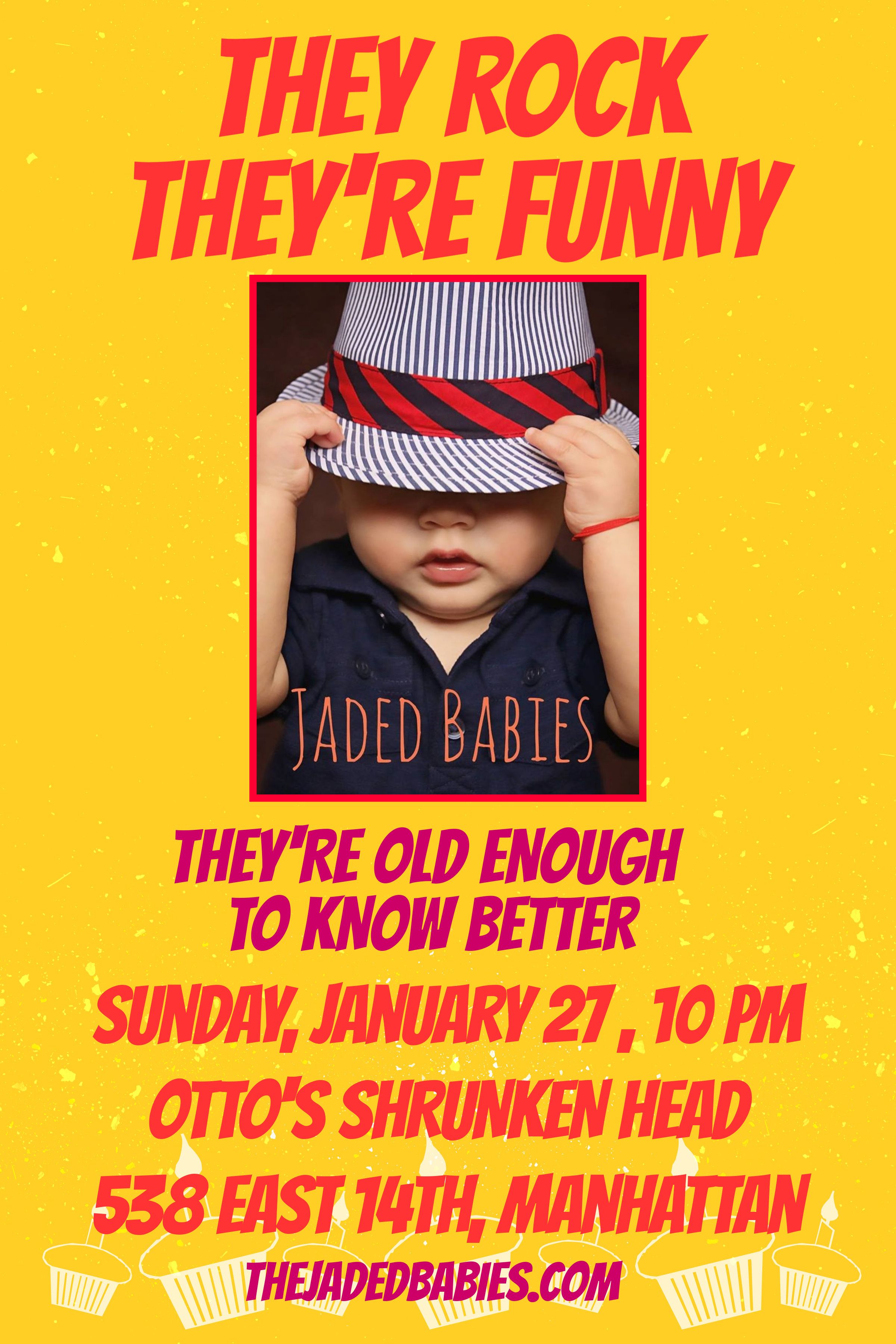